I’ve posted dozens of photos from the Kennedy Library in the last few days. Most are terrific color pictures that fill in areas for that period that I didn’t have good photos for already. An additional few also replace inferior versions of the same photos that I’d found in books and elsewhere.

I’ve added some new photos from the Kennedy Library of various parts of the Residence in 1960-1962. More to come.

It came out a couple of weeks ago, but with few details, that the White House has gotten a set of solar panels. Now Earthtechling provides the photographic evidence. 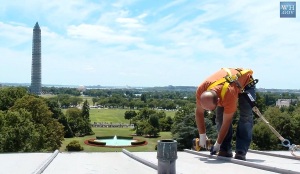 A White House official confirmed to the Washington Post Thursday that installation had begun on fitting the President’s residence with solar panels.

Edit: As always, on the What’s New page.

I’ve added several new images of the Residence from the early 19th century that I found in the Library of Congress. They seem to be slowly adding more of their collection online.

My thanks to Patrick Phillips-Schrock for two gorgeous photos from the Kennedy renovation. We’ve never seen the China Room and the Vermeil Room from this period so clearly. Check them out on What’s New.

Patrick has also supplied images that portray his research into the Blue Room before it was blue.

I’ve added several more new photos from the current White House and one of the Family Theater from the 1990s.

I’ve added a dozen or so photos from the new Kennedy Library material to the site. They are focused around the second floor and ground floor of the residence in 1960—before the Kennedy renovation—and a few from 1961.

Stephen M notes that the JFK Library has released 1000+ digitized photos of from the Kennedy administration, including many never-before-seen images. There are some great ones of the China and Vermeil rooms and some rooms upstairs and even on the third floor.

And if you figure out how we can download the full-sized image, please post a comment here. These are public domain photos. American taxpayers paid for them. We should have them in their highest-quality form.

I’ve changed to front page again, and I’ve added a few new photos from the White House Flickr feed from the last couple of months. I have some other things to get to as well.

Also, I got this note I’m not sure about. I missed the documentary in question….

Last month, I saw a PBS documentary about the role of the White House photographer, and it showed him, Pete Souza, in his office. The office is identified in the documentary as the former White House barbershop, with the only remnant of its former use being the mirror on the wall.

This contradicts the museum’s photos, which suggest that the Homeland Security Council office is in the former barbershop.

The White House posted a great new collection of photos on the official Flickr feed several days ago. They include not only interesting angles in the new Oval Office, but glimpses of the Dip Room, the state floor rooms, the Cabinet Room, and even the Oval Office Patio. I’ll be adding some of those to the site in the coming days.

Big update today, with nearly two dozen new photos, mostly recent ones of the Obamas from the official Flickr feed. The photos are from all over, but most from the West Wing.

There are some good new pictures on the official Flickr feed, including a terrific one of the president waiting in the Butler’s Pantry to make his entrance to a meeting in the State Dining Room.

Well, it’s finally happened. I haven’t posted anything for an entire month. And now I have two front page change postings back to back.

Well, at least this is a new image never used before on the site. And, surprisingly, it’s the first time I’ve ever used a staff area for the front page.

I did another pass thru the Library of Congress and found a few new photos, including the Roosevelt Room before it was even the Fish Room and the Ushers Room and Linen Room. These happen to feature staff, and it’s nice to see Mr. Crim and Mrs. Nesbitt in what are practically portraits.

I also added a couple of brand new photos of the Tennis Court as basketball court.

Painter in the Cross Hall

At last we’ve got some good new photos on the White House Flickr feed. These include some in the West Wing and also a rather nice one of fresh paint in the Cross Hall. Here’s a close up one that one.

Just a few months into the new administration, and fresh and interesting photos of the White House have become few and far between. I’ve been spending most of my time on my other websites, but today, I’ve added a few new pictures that freshen up the Entrance Hall, Situation Room, and Elevator Hall. See the What’s New page.

Some time ago, I created a blueprint-style image of the south elevation of the mansion as a front page. Today, I’ve followed up with a north elevation in the same style. As usual, you can see all the front pages on the Front Page Gallery.

The White House photo stream has some nice new pics of the south lawn and West Wing interiors. In some of them, the president has got that football again. He’d better not come crying to me if he breaks something and gets grounded for a week.

The White House has released a number of new photos taken in the West Wing. Here are an interesting couple of photos of the president chatting with Congressional leaders on the patio outside the Chief of Staff Office, a site rarely seen. Also, a really good one of the ceiling medallion in the Oval Office. And here is one looking thru the passage between the Blue Room and the Green Room that really shows the paneled storage doors.

And cheers to Nancy Reagan (shown here on left) on the commemoration of the 100th anniversary of Ronald Reagan’s birth.

I’ve added a few more photos of Lady Bird Johnson in the family quarters from the Life photo shoot in 1964. I had some already, but it’s such a rich and illustrative “visot” with the first lady, that I decided to add more.

Nancy Reagan visited the other day, and Pete Souza gave us a nice photo of the current and former first ladies in the Family Residence Dining Room.

I’ve added another big trove of photos from the Library of Congress, this time focused on the Executive Mansion in the Taft and Wilson eras. And we’re not talking the state floor; we’re talking bedrooms and nooks and crannies, including the old Butler’s Pantry and the old old Flower Shop.

The Harris & Ewing photos are exceptionally high quality and have been digitized at extremely high resolution—just a spectacular treasure. You can just about read William Howard Taft’s accounts papers. And among his desk-side books was Brewer’s Dictionary of Phrase and Fable, a favorite of mine since I was a teenager. 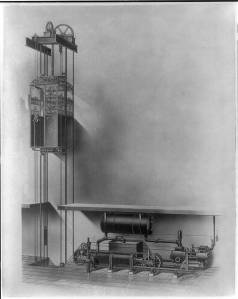 A routine search of the Library of Congress called up this tantalizing gem: an old cage elevator etching labeled “D.C. Wash. White House. North portico. Bordered with 8 state seals and busts of10 presidents” and “This record contains unverified, old data from caption card.” and “c1907”. The caption is obviously wrong, but if it really is something to do with the White House, then it’s surely the original elevator or second elevator (I think there have been four).

Then there’s this interesting pic of JFK in what is clearly a White House elevator, but which floor? There is a dead end where the staircase should be, which is a little baffling. Since he’s with Caroline (or is that Eleanor Roosevelt?) he could be going to her classroom on the third floor. The golf clubs suggest a part of the family quarters, maybe the sub-basement.

Google’s Life magazine archive has added another new clutch of terrific photos of the White House. Some of which I’ve added.